Paul Keating gave a speech to the Melbourne Writers' Festival on Sunday. He took the opportunity to wrestle with the shifting sands of world power in our era.

As I read it, I was reminded of the time, now more than ten years past, where national debate took place in a more robust, colourful atmosphere. He was Prime Minister for a scant three years, sandwiched between the reigns of Hawke and Howard, who by comparison each ground down the weighty issues of the day, made public discourse itself rather moribund, and certainly didn't contribute to outcomes as momentous as, for example, the Wik and Mabo decisions (His 'Redfern speech' - available here - strongly signalled his sympathies with these issues, and directly set the context for Kevin Rudd's impressive apology speech in Parliament). 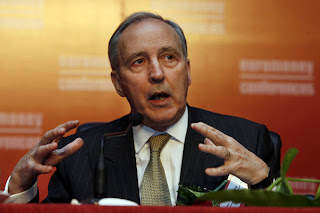 Although I find much of the speech quite insightful in the issues and perspectives canvassed, there's a fair bit that I disagree with (eg the significance of the EU) - I'm sure most would say the same, although the points of departure will differ. Also, I find the closing stages about as weak as the beginning is strong.

But for me, the value of Keating's speech is in a welcome sharpness and turn of phrase, and the breadth of ideas presented. Again, a call for vision.