Evolution experienced - on a bacterial scale

A fascinating experiment written up in PNAS brings to life - and helps quantify - evolutionary theory that is usually only induced or deduced from widely scattered evidence.

Richard Lenksi, at Michigan State University, has been running a meticulous experiment on the common bacteria Escherichia coli, aka E coli (below). 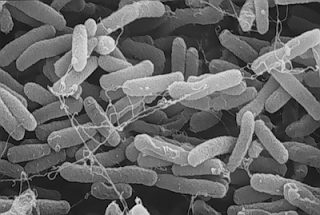 Starting with a single bacterium in 1988, he cultivated its descendents (daughters, as they grow to a certain length, then reproduce asexually through binary fission, splitting) into twelve populations in an identical medium. That medium was glucose-limited, and contained a secondary nutrient, citrate (based on citric acid), which E coli cannot use.

Those populations have evolved through 44,000 generations over the past 20 years; every 500 generations, Lenski extracted and froze samples of each strain. In this way, he could test mutations in the populations, even to the extent of "replaying" the evolutionary clock from given points.

In general, each of the 12 samples evolved in these lab conditions larger cells, faster growth rates, and lower peak population densities.

And there evolved a population of E coli that could metabolise (and thus feed on) citrate. This happened in only one of the 12 populations, from around the 31,500th generation.

Lenski calculated that within this time, all "simple" mutations would have appeared at some point in each population. He reasoned that citrate-metabolising must be either a particularly unusual mutation, or one that required several mutations to accumulate in a rare sequence - no E coli strain had been found with this trait outside his lab.

So he extracted some of the frozen samples for testing. The finding was that the special trait evolved only when the population of that one-in-twelve strain was replayed from at least the 20,000th generation - no earlier. This demonstrated that a crucial precursor to the citrate-metabolising trait had occurred around that point.

And with the additional nutrient available, the citrate-metabolising strain yielded a greater population size and variety.

Thus far, the experiment adds little of significance to general evolutionary theory, apart from adding some numbers to the pace of change at a macro level - and then yet, further similar experimentation could better quantify the statistical variance involved.

But the experiment is a very neat, clean illustration of a significant trait evolving via a series of smaller and insignificant steps. And of the randomness inherent in evolutionary change. Beneficial changes are contingent, and can rely on key chance developments. Then once a crucial point has been crossed, certain outcomes are much more easily achieved.
Posted by S Simmonds at 11:12 pm