"Georgia will become a member of NATO if it wants to - and it does want to."

With those words relating to the conflagration in South Ossetia between Georgia and Russia, German Chancellor Angela Merkel has raised the stakes in rhetorical warfare that increasingly resembles a poker game. Neither side knows how far the other is prepared to go, what cards they will play, but so far is willing to test the other.

Earlier, Russian president Dmitry Medvedev had given the US a very direct message to keep out of the situation, saying that US intervention would endanger the current Russia-US relationship. In that light, Russia may see any escalation in NATO involvement as simply US-by-proxy. Concurrent with Merkel's declaration, Condoleezza Rice was referring to Russia's reputation as in "tatters". 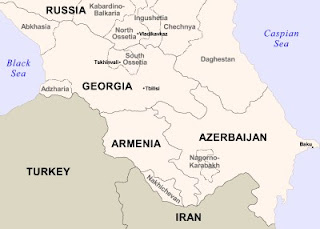 Ossetia is a region that straddles the Greater Caucasus mountains that separate Russia from Georgia. North Ossetia is clearly a Russian territory, while South Ossetia is ostensibly part of Georgia, although strong irredentist pressures have kept Georgia from maintaining control of the region and resulted in a breakaway government in South Ossetia that is not recognised internationally. Over the past twenty years, tensions between Georgians and Ossetians (who speak a language originating in Iran, although they are predominantly Orthodox Christians) has resulted in violence, refugees, and claims of ethnic cleansing on both sides.

The Georgian army is pathetically small compared to the Russians, which is why Russian forces have blithely traversed parts of Georgia since the latest conflagration began, and still do, despite a ceasefire agreement that stipulated withdrawal of Russian forces from non-Ossetian Georgia. Overnight, a BBC correspondent asked some Russian soldiers when they would be leaving, but of course the soldiers didn't have a clue, and seemed entrenched. Russian calls its forces "peacekeepers", however there does not appear to be any international sanction of this, and Georgia refers to them as an army of occupation.

The current turmoil erupted between Georgian and Ossetian separatist forces on August 1, with both sides claiming ceasefire violation by the other. Russia stepped up rhetoric after Ossetian refugees streamed into Russia, then despite another ceasefire agreement, Georgian president Mikheil Saakashvili vowed to wrest control from the Ossetian "criminals".

Saakashvili, who has in his background US legal training, arose from the ruins of the notoriously corrupt Georgian administration of ex-Soviet Minister Eduard Shevardnadze. Young, pro-Western, and very popular (96% of the vote in 2004), Saakashvili has reduced corruption a fair bit. But from that mandate (down to 53% this year) he's proved himself capable of being as much an autocratic firebrand as any of the ex-Soviet leaders.

In probing the origins of the current hostilities, I could find nobody blameless. Russian, Georgian and Ossetian leaderships all have their own agendas, and in pushing them, cause people to suffer.


Update 21-Aug-08: Overnight BBC news added a couple of pertinient points to the above. First, Poland has agreed to host US missile bases (that purport to be strategically placed for Middle Eastern, rather than Russian, threats. As if). This is a salient development because a) talks had stalled prior to the current Ossetian conflagration; and b) Polish public opinion was against it, now is for it - again, possible to sheet home to the Ossetian issue.
The other development was Human Rights Watch reporting that whereas Russian had claimed genocide due to indiscriminate Georgian shelling of Ossetia, all evidence points to deaths being numbered in the dozens rather than thousands. This comes from ground reports such as hospitals, burials, etc.

Still it remains that no side has clean hands.
Posted by S Simmonds at 12:38 pm

Yes, Georgia has been on and off the Russian yoke several times. Animosity is always prolonged when it goes back over the years.

But one also has to bear in mind the flashpoint: Ossetian separatism. Several factors come into this: how the Ossetians are treated by the Georgians, how the _separatist_ leadership fans the flames, and existing tensions within Ossetia between the Ossetians and Georgians, who make up a sizeable population in the region. Violence there has been simmering even before the breakup of the Soviet Union. I'm sure it's not helped by the current leader, an ex-wrestling champion who fell out with his mentor, another ex-wrestler.