The Devil frog and Gondwana

It’s worth noting recent news reports of a fossil from Madagascar: the Beelzebub frog (ie Beelzebufo), about the shape and size of a "squashed beach ball". 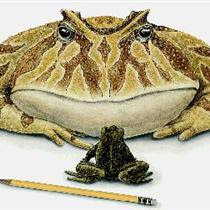 Noteworthy specifically because of its resemblance to South American frogs, and consequent claim that South America and Madagascar had Gondwanan connections until well into the late Cretaceous. (Madagascar only diverged from the fast-moving India comparatively recently).

There are two competing claims: the traditional view is that South America and Madagascar diverged about 120 million years ago; a more radical one (supported by this finding) gives a more recent 80mya (around the same time New Zealand split from Antarctica).
Most news reports gloss over the incongruity of Madagascar being directly connected to South America, but some indicate the path - via Antarctica.
The relevant scientific paper is at PNAS - but it's sufficiently recent that it requires subscription or payment.
Posted by S Simmonds at 5:11 pm