Evolution: Size change may not be what you think

In his book Life's Grandeur, Stephen Jay Gould has a salutory point to make about evolution and size. In typical Gould fashion, he knocks on the head a "conventional wisdom" that is not really so.


Foraminifera are small, single-celled marine organisms that form shells. Their abundance is such that they have been used as fossil markers that help in dating sedimentary rock. Mostly, they are fairly small, less than a millimetre. 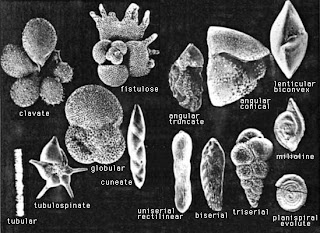 Gould details three episodes in their evolution: their emergence in the Mesozoic (dinosaur-dominated) era; in the following Paleogene period; then subsequently in the Neogene period to the present day.


The boundaries between those three episodes are marked by extinction events, where most foram species died. In each case, the foundation (or surviving) species were relatively small; conventional wisdom goes that they increased in size over the course of each episode.
There is a generality called "Cope's Rule" that observes that most taxons tend to increase in size over the course of evolutionary history. In this case, "most" is around two-thirds, and foram evolution would seem to follow that form.


However, Gould argues (rather successfully, I'd say) that this apparent trend is not so, as such. Evolutionary changes occur through random mutation (with environmental* selection being the winnowing process). One might expect that of mutations that affect size, if they are random then a change could equally be an increase or a decrease in size. However (and this is Gould's point), if the starting point is close to the small end of the range of viability for that organism, then over time the spread of size changes would favour increases over decreases. This would lead to the appearance of an increase in size, if one measured the mean (average) size. Also true, of course, if one measured the upper limit of size. If size was displayed in a standard bell curve distribution, the change in form of the curve over time would illustrate a "wall" at the lower end - a lower limit against which size movement would not be able to penetrate. The figures Gould used showed minor change over time in smallest size, but much more marked change in largest size.


When you think about it, it makes intuitive sense - an organism cannot simply dwindle away at the lowest end of the size range. The lesson is to avoid taking at face value any narrative that includes an increase in lineage size over time.


I do have a couple of comments to make on this. The first is that it has certainly been demonstrated that colder climates lead to larger size (on an evolutionary time scale) in animals that have over time adapted to such changes. There is some intuitive sense here, in that a larger body has a smaller surface-to-mass ratio, which is more efficient for heat retention.


The other comment is that one could also try Gould's measurements on a sort of logarithmic index, to see if size changes (from a starting point based to 1) would demonstrate some evenness of logarithmic change.


*Clearly the standard term here is "natural selection". My preference for "environment selection" is intended to make clear the encompassing of selection not just on the basis of inter- or intra-species competition, but environmental changes and also the human hand.