Further notes to an earlier discussion on the discovery of a unique New Zealand mammal.  To recap:

The SB mammal (or "waddling mouse") is represented by a set of fossils found in New Zealand in December 2006. Found were two partial jawbones (mandibles) and a partial femur, dated to 19mya. Quite small - the bar on the photo represents 2mm. By the looks of the front incisors (picture C), it would have been quite mean - if it was bigger. 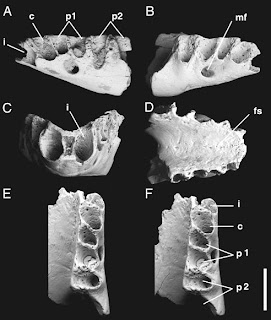 (jawbone views from the paper, referenced below.)

The reason the femur and mandible are linked is simply one of parsimony - nothing else like them has been found. A fair assumption, although it remains falsifiable.

Some of why it intrigues me so much:
- the proliferation of unique NZ bird life (including several flightless birds) had been suggested to be due to the lack of native terrestrial mammals
- it's a "ghost lineage" - no links to living mammals, yet it survived until very recently (19mya)
- how did it get there? - NZ split from Antarctica about 85 mya
- in particular, it has been characterised as non-therian, suggesting it was an egg-layer, unrelated to any other mammalian species extant in the Miocene epoch. Archaic, out of time.

APP (Acta Palaeontologica Polonica), a Polish publication in English, has a particularly significant reference from the paper: In quest for phylogeny of Mesozoic mammals - this links to the abstract and full 78 page text by three very significant names in the field: Luo, Kielan-Jaworowska, and Cifelli.

The only vaguely useful blog discussions I've found on this mammal are at Tet Zoo, and one at WebWeaver's World.

News reports mainly rehash, but perhaps the one at New Scientist is best.