Riftia pachyptila, the Giant tubeworm, is a marine annalid (the phylum, or body type, most familiar to us as the earth worm). 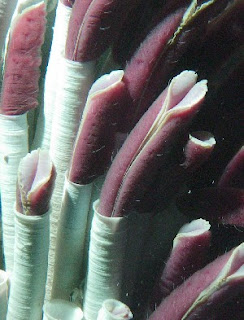 These creatures appears to be sessile, which means they latch on to a rock (or somesuch) and stay there (in the adult form at least). They live near black smokers, geothermal vents in the ocean floor. The emissions of these vents are particularly hot and acidic.

They have no digestive system as such: no mouth, no gut, no anus. They do, however, have specialised bacteria inside them, which make up perhaps 35% of the tubeworm's weight. The red plume you see is an organ used for absorbing a number of chemicals, including oxygen, carbon dioxide, and hydrogen sulphide. These chemicals are fed to the bacteria, which then metabolises them into nutrients for the worm.

I'd note that this is one of the few food cycles that doesn't rely on the sun's emissions, directly or indirectly. Such cycles will typically involve bacteria.

My research thus far hasn't been able to answer a few questions: are the juvenile forms of the tubeworm non-sessile? (that is frequently the case.) How does it excrete waste products? (if there are any.) And how do the bacteria get inside them in the first place? (in the juvenile stage?)

It's likely this worm was able to adapt to a niche that was otherwise unoccupied. It would have few predators either, so over time it was probably able to strip back its organs to the bare essentials.

The other thing of note is that whenever an evironment is found on earth that is hostile to life, you're likely to find bacteria adapted to it.

Evolution oddity #1 was: the anglerfish.
Posted by S Simmonds at 10:01 pm