Sorry: A historical act of reconciliation

When the band Midnight Oil played at the Sydney Olympics in 2000, they wore costumes emblazoned with "Sorry". Many watching from overseas wouldn't have known that it was a gesture of reconciliation to Aboriginal Australia, the Stolen Generations in particular. 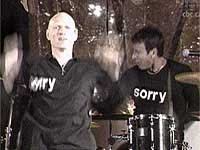 Today, Oils singer Peter Garrett was in parliament as a Minister in the government that brought about a historical event.
When Kevin Rudd said sorry on the first full day of parliament sitting under his leadership, it brought much of Australia to a standstill. Many workplaces, mine included, watched live.
I didn't think I would be so moved, but tears came to my eyes several times in the course of his apology and his speech on the matter immediately afterwards. The cameras cut to audiences in the public gallery and outside parliament, and it was very moving to hear the words and see the reactions. 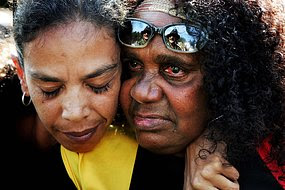 All Australia's living Prime Ministers from both sides were present - bar the last, John Howard, whose 11 years of obduration made this moment that much more poignant.
Opposition leader Brendon Nelson gave a reply that started off well, according to aboriginal people watching, but sank into partisanship and defending the previous government. The response was boos and backs turned, around the country. One news commentary: "Dr Nelson spent the first half of his speech apologising for the removal of Aboriginal children, and the second half implicitly suggesting that there should be more of it today."
Nevertheless, it was a historical moment, and Rudd's words will live on - particularly his subsequent speech outlining initiatives to turn around the appalling housing, health, and education situation of many aboriginal people.
Rudd's performance wasn't great oration, but the words mattered. At a reception afterwards for representatives of the stolen generations, he relaxed more and was much warmer. 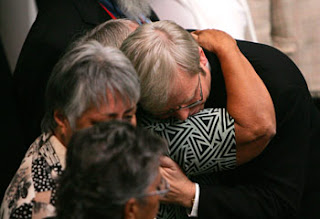 The words were not actions, but what they symbolised was welcomed around the country, a very important step in aboriginal reconciliation. And they came with commitments.

The reactions of Aboriginal Australians to this day were warming. Their expressions and gestures, their words afterwards, demonstrate the real power in this act.
Some background stories on the eve of the apology.
One-time Aboriginal tennis player Yvonne Goolagong's response.
Other comments include: Maureen Riches, who travelled to Canberra from Shepparton, Victoria: it is "by far, the most momentous day" in Australia's history.
"I've been working for this for 11 years, ever since [John] Howard refused to apologise," she said.

Elder Beryl Gambrill said Mr Rudd was sincere and respectful.
"It brought back memories of what happened to our people when Kevin Rudd was talking about saying sorry to families," she said.
"I didn't think it was going to be that powerful. But I thank Kevin Rudd for what he said in his speech and thank him for all Aboriginal people."
Posted by S Simmonds at 5:20 pm