I can think of no useful sporting analogy. But Kevin Rudd has made three great moves, but faces two brick walls.

His first act as Australian Prime Minister was to ratify the Kyoto treaty. This is not simply symbolic: there are binding commitments behind it.
On Wednesday in parliament, he apologised on behalf of Australia to the Stolen Generations. This wasn't symbolism either: he made important commitments in his speech (on health, education and housing for aboriginals).

Today he's off to East Timor. This, directly after attempts on the lives of both Timor's President and Prime Minister (looks like Horta will pull through). He has also commited more troops to the UN peacekeeping force there. On last night's Lateline, Rudd put his actions squarely in the context of safeguarding Timor's democratic processes. Resource commitment, and personal.

[A welter of half-truths surround the Timor situation, not in the least helped by Murdoch's Australian newspaper, which immediately claimed the rebels only wanted to talk, but were mown down. Facts so far seem to be that Timor's leadership had in the past replaced their Australian guards with locals, so no international forces were on the scene at the time. Although it's been claimed the rebels "only" wanted to kidnap the leaders, which begs the question why they indulged in a shootout with Gusmao's guards.] 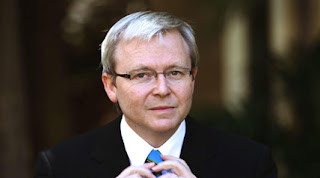 Rudd's headlining occasional catchphrase is more one of bravura than bravado - he's used it a few times when the situation's done and dusted.

But the signal challenges are pace-stopping. First, he's trying to keep a lid on inflation while stubbornly meeting his election promise on tax cuts. Second, he has to manage meaningful action on climate change. There is no clear way forward.
Posted by S Simmonds at 4:16 pm