Sydney Opera House is iconic on the outside, but unfunctional inside. According to the Sydney Morning Herald, the original brief for a large hall combining operatic and symphonic functions was doomed from the start. As a result, opera ended up in the smaller of the two shells, which was never entirely satisfactory.

There are now plans to rebuild the opera theatre - for $700m. The Herald suggested that price could buy a whole new building, and now the Herald reports a proposal by architect Ken Woolley to build an opera theatre next to the Opera House.

Former PM Paul Keating now expresses his dislike for that proposal, suggesting another site altogether. He calls the idea an "all too proximate appendage to the great composition". The issue is the Opera House as a collaborative product of both design and site.

This speaks to the outcry over the Opera Quays building ("the toaster") which was seen as sullying the land next to Bennelong point. The opprobium is muted with the accomplished fact of the building, which doesn't really lessen the original criticism. 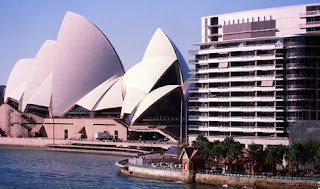 Ideally, the Opera House would house opera - that is how this 20th century landmark is known throughout the world - with no building close by. Unfortunately, I think this vision has already been abrogated by the toaster. Yet that doesn't mean it needs to be abandoned altogether.

Previous posts on an alternative Sydney have included two early designs for the Opera House (here and here) and one for the Harbour Bridge, as well as a vision for the future of the area in front of the Town Hall.


A substantial remaining issue is the removal of the Cahill Expressway, a blight on Circular Quay (and the transformed Custom House).
Posted by S Simmonds at 8:34 am