Following straight on from yesterday's comment on the clearing of Circular Quay, the Herald splashes just such a proposal on the front page: 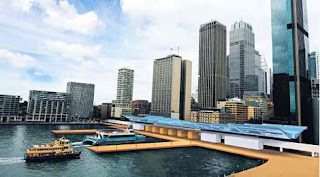 This out of the office of Mayor Clover Moore, from Danish urban planner Jan Gehl. The text to go with the picture says that in this proposal, the expressway would be torn down (and presumably the railway line underneath, which would be sunk underground as per earlier suggestions), and the ferry terminals "streamlined and moved to the east". Current vista below. 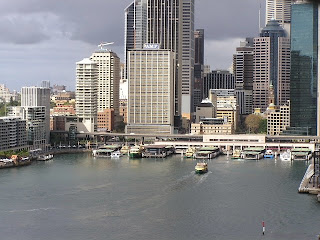 It's admirable to open it up from the water to the Custom House to the cityscape; but I'm not convinced the new proposal is sufficiently dramatic, or ultimately much different from the current situation. Moving the ferries gives it much better impact, but retaining a barrier - so to speak - between city and water... it doesn't really complete the vision.

This is actually part of the council's city vision for 2030; the Herald's website has quite a bit more of it on display, including removing all traffic from George Street, reducing car parking, removing the Western Distributor, increasing park space in Darling Harbour, replacing the (apparently inadequate) Convention Centre with apartments, and hiding the whole Central railway land area under a mass of shops, apartments, and entertainment and convention facilities. The Herald has befores and afters for George Street, Darling Harbour and Central. There's also a slide show. All definitely worth a look.