Dolphins are human too

I must recap on a recurring theme of this blog: a meaningful study of evolution requires a continual process of re-orienting oneself away from the human perspective.


Deanthropocentrism. No other discipline mandates this. The nearest one gets is the physics of vast (and minute) scales of time and/or space, but this becomes an academic exercise with little direct meaning to the observer.


Not so evolution: the ramifications are often direct and clear. We are not the most successful form of life, from the perspective of either a lengthy run, or the most numerous or ubiquitous, or the greatest mass (that's bacteria). We have shaped our environment like none before, achieved consciousness, left artifacts. But all that can fade with the ravages of time. We are here strictly by lucky contingency. As but one example: if the K-T meteor hadn't struck, we would not have developed this body shape and would still be huddling under the shadow of dinosaurs.


All of which must be anathema to creationists. Ah, but that's their lot.


I'm reminded of another dent to our pedestal today, by a news report of a friendly dolphin. Moko, in New Zealand, is apparently at ease with humans, playful even. This dolphin let a stranded mother and baby sperm whale back out to sea, at Mahia Beach in Northland.


Volunteers had failed in four attempts to direct the whales back out to sea. The whales were visibly distressed, adjudged doomed, but "as soon as the dolphin turned up they submerged into the water and followed her". They never came back, but an hour later Moko returned.


A Conservation Department official speculated the dolphin had heard the whales' distress calls. 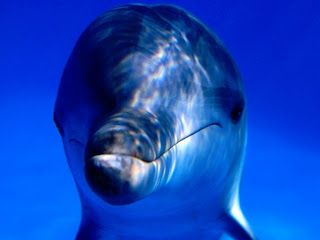 Plan, purpose, altruism, compassion. Some of the traits we typically, erroneously, ascribe to higher-functioning humans only.


Such a story - about dolphins in particular - is not new. But it's a timely reminder that we are blindly self-centred, pay too little heed to the world around us. We don't have a monopoly on these advanced qualities. In fact, some of our more basal capabilities are notably absent in dolpins.
Posted by S Simmonds at 10:47 pm