New Scientist had an article recently on evolution, by Donald Prothero, a geology professor in California. It was trying to smooth the understanding of evolutionary relationships with ten examples of linkages between taxa at various levels. It seems to be based largely on Prothero's recent book "What the fossils say and why it matters" (Columbia Press). Prothero is often described as a paleontologist (including by Stephen Jay Gould); his books include the paleontological and the geological, although heavily weighted towards the latter.

Yet the first evolutionary example in his article is rather contentious. Additional research on the matter gives some insight into the difficulties of phylogeny and taxonomy. 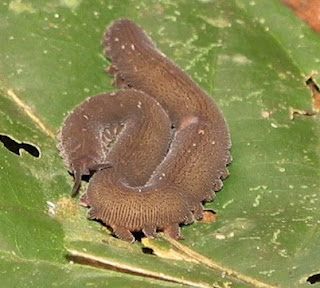 This example was Onychophora - the velvet worm. This is a phylum with just two families - tropical and southern hemisphere - and 80 to 90 species. Their mode is the damp forest floor; it is hard to know how prevalent they are; they are difficult to count, and when this has been done, they're proven endangered. Yet most species are described only very local to where the type specimen (the official sample against which the species is measured).

Prothero depicts Onychophora as the link between two phyla: arthropods (insects, spiders, crustacea) and nematode worms. The former is unremarkable; they are consistently grouped near arthropods. Yet how near, and the closeness of their relationship to nematodes, seems to be still up for grabs.

Tudge puts them in an unresolved trichotomy between Tardigrada and Arthropoda, which grouping is in turn unresolved against nematodes and nematophora (hair worms).

Palaeos.com gives three alternatives. The first posits them as a sub-phylum of Arthropoda, sometimes lumped with Tardigrada as Lobopoda - yet this is not such a common approach, and they acknowledge the polyphyletic questionmark over that. They also list a 2001 source (Peterson and Eernisse) placing instead another obscure phylum, Chaetognatha (marine worms) between Arthropods and Onychophorans. Thitdly, they mention an alternative (Halanych, 2004) that agrees with Tudge.

Wikipedia puts Onychophora between the nematodes and arthropods, with tardigrades closer to the arthropods.

One thing they all agree on: it was wrong to portray Onychophora as the intermediate between annalids and arthropods. Panarthropoda has been used (as recently as Tudge) to lump Onychophora, Tardigrada, and Arthropoda, but it seems a more currently-accepted super-phylum is Ecdysozoa - which adds a few other phyla, including nematodes as closest to the 'panarthropoda'.

I like a clean cladistic diagram. But the jury's still out, so it won't happen yet. The article's a little simplistic, but a rough consensus does seem to place our two lobopods between arthropods and nematodes.

How much more time and grant money will we spend searching vainly for trivia that may point or allude to evolution? Now we are into velvet worms. This demonstrates how desparate evolutionists are to prove their myth. The terms,"trying to prove the understanding", "the difficuties of phylogeny and taxonomy", "seems to be still up for grabs" are prime indicators of the paucity of evidence that supplants evolution. Is there not something more important in life than the study of velvet worms concluding nothing in the study??

Sure there are difficulties with taxonomy. Molecular analysis is causing wholesale revisions - as I've said, morphology can be quite misleading due to factors of convergent evolution.
Yet, that's what makes evolution exciting for me - there's plenty of scope for further analysis.

But this is science, not (specifically) myth-making. To paraphrase a quote I've mentioned before: the beauty about science is that it doesn't matter what you or I believe. The facts are the facts. Science's task is to uncover the facts through a constant process of discovery and analysis.
I wouldn't rail too much against scientific method if I were you. It's the same paradigm that's given you most of the creature comforts you have today. Reject scientific method (and evolutionary "theory" is inextricably an intrinsic part of that method), and you may as well deny the existence of what you see in front of you every day.

I'm happy for you to take issue with specific points. It helps to come from a position of understanding some of the debate's issues, however. I suggest a little research into these velvet worms.

Our understanding of taxonomy has been an evolution unto itself. You make a good point about molecular analysis, which gives us a whole new dimension on the relationships between species.

I've actually made a few refinements to the above post, which I trust don't break down Anonymous' arguments too much! They more closely resemble the struggle people have to set forth relationships in a strictly cladistic way. 'Rough consensus' means we're still a way off yet.