This is a story about native New Zealand birds and animals, one that gets more interesting as it goes.

First, I'll start by drilling down through the origin of birds.

Birds are members of the taxonomical class Aves, and are the only living descendants of dinosaurs.  The earliest recognised Ave is the archaeopteryx, dates from the Jurassic period, about 250 million years ago (mya). As a result of the dinosaur-killing KT meteor 65 mya, most near relatives are gone: apart from birds (as descendants), the closest remaining relatives to dinosaurs are the crocodilians. In fact, what we now know as birds are the Avian sub-class Neornithes, and are not direct descendants of the archaeopteryx.

The earliest division of modern birds is between the two superorders Palaeognathae - nearly all are ratites - and Neognathae - the rest. Ratites (properly, the order Struthioniformes) are effectively one of the oldest surviving avian lineages - and they're all flightless, descending from a flying ancestor but at some point no longer needing to fly.

Not all flightless birds are ratites. Many different bird families have evolved flightlessness on islands, where they have found themselves with no predators. Richard Dawkins notes that rails in particular "lend themselves to island-hopping followed by flightlessness".

Why lose flight? Colin Tudge: "flight ... exacts an enormous price. It requires commitment from the entire anatomy, and a huge input of energy".


Ratites are the most well-known of the flightless birds, encompassing the ostrich, emu, cassowary, rhea, kiwi, moa, and extinct elephant bird. Between them, they represent pretty well all the current pieces of the old southern land mass Gondwana. That suggests survivability of this grouping, even when exposed to predators. Some were pretty large, though, but perhaps ironically the largest ones, Madagascar's elephant bird and New Zealand's moa, survived only until the last millenium - finally a victim of the greatest predators, humans. The elephant bird was the heaviest bird ever, at up to 500kg and three metres tall.

The ostrich is hard to place, but Dawkins reckons it was with the elephant bird when India and Madagascar became isolated from the rest of Gondwana then, like other species, took the fast "Indian ferry to Asia", later to take a slow way back to Africa.

Moas diverged from the rest only about 80 mya - when New Zealand split from Gondwana. A couple of notes about their traditional representation in New Zealand: first, they did not tend to hold their heads fully erect, as you see in the museums. Rather, the head was closely level with the body, for browsing. Second, one of their predators was something called Haast's Eagle, the largest eagle that ever lived. This extinct giant eagle is something I certainly never heard about growing up in New Zealand. Intriguing. 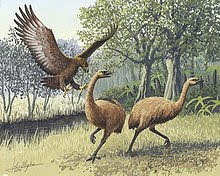 Anyway, given the robust ratite's story, you'd expect the kiwi to be closely related to the moa. Well, it's not. It's closer to the emu and cassowary, both from Australia and New Guinea. Dawkins suggests the kiwi arrived in New Zealand via New Caledonia. 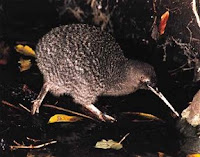 It's worth considering the effects of predation over time.  For the elephant bird and moa, size was a boon, but ultimately the source of their demise as they became relatively fearless. For the kiwi, nocturnalism may have been a recent survival mechanism; yet Wikipedia notes that in predator-free sanctuaries, the notoriously nocturnal kiwi is often seen in the daytime. For others, speed has been on their side.

I mention all this to help give context to the unusual 19myo mouse-size SB mammal fossil (discussed here and here) recently found in NZ. Predation has to be a significant issue in the story. How did it survive 60 million years in NZ? What size changes might have happened to avoid predation in a land of bird seeking small morsels? Why did they ultimately disappear? This species doesn't seem to have had any impact on the NZ story as it is known so far...

Thanks - that was an excellent summary! What intrigues me is how the ratites survived the KT extinction. One would imagine they would be particularly vulnerable being flightless and laying there eggs on the ground which seems very likely for their ancestor at that time.

The narrative suggests ratites were endemic to Gondwana, and diverged with its breakup. That breakup took from about 167 mya to about 85mya (as per http://en.wikipedia.org/wiki/Gondwana).

I'm not aware of the pre-KT ratite makeup, although I would distrust the Wikipedia narrative on Paleognaths (see http://en.wikipedia.org/wiki/Palaeognathae), not because of a lack of cited sources, but because the passage doesn't make enough sense. That aside, the implication is that each [surviving] ratite species separately survived the KT event.

Yes, that could signal something intrinsic to the ratites - those that survived. One good plausibility is that being on southern landmasses (including India, which had only just split from Gondwana), they escaped the worst of the ensuing upheavals. (Wikipedia's KT entry pretends Paleognaths didn't pass through the gap, which again illustrates that that resource only goes so far.) A quick search shows Cracraft cited several times in support of this southern hemisphere theory - see http://geowords.com/histbookpdf/h17.pdf, for example. So I'll stick with that, pending further info.

I just wanted to comment saying that I've read your stuff and I think that you may enjoy my blog or perhaps we could collaborate or contribute with each other.

Anyways, check it out; it's alot more abraisive than yours sometimes, but it accomplishes the same thing.