Neoteny is a very interesting concept in evolution. It's the process by which an animal [which differs between juvenile and adult form] becomes sexually mature in the larval (or juvenile) form. Thus can be set off a divergent evolutionary path.

The Axlotl (sic) is probably the most well-known example. It's a member of the salamander's order, Urodela. 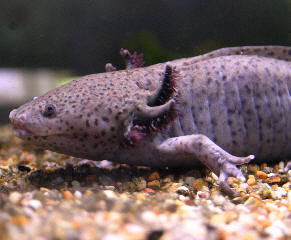 Although salamanders look rather like lizards, that's just due to convergence (see previous evolution post), and they're actually amphibians. Colin Tudge refers to that shape as the "archetypal tetrapod" - albeit one whose legs sprawl out the side, as in many reptiles, as opposed to being positioned beneath the body as with most mammals.
The axlotl is effectively a salamander that never made it to land. The adult form retains a number of the features of the salamander's early water-based existence, such as gills, while having grown the limbs that would be expected in an adult salamander.

Richard Dawkins (The Ancestor's Tale) details experiments that verified this neotenous nature - separately conducted by Vilem Laufberger and Julian Huxley (brother of Aldous). They each used hormone injections (thyroxine, the absence of which is said to have set off the neoteny), and induced the axlotl to lose its gills and become a fairly normal salamander.

Dawkins refers to the general case as heterochrony, which is the change of pace (a slowdown or a speeding up) of one developmental process relative to other developmental processes. He suggests that this must be behind a high proportion of evolutionary changes in anatomical shape.

Dawkins then mentions the newt, a type of salamander which does this twice, so to speak. It matures to a land-based adult form, but doesn't reproduce. It only becomes sexually mature when it returns to the water, and reclaims some (but not all) of its larval features. Strangely enough, one aspect that doesn't roll back is the gills. It's easy to postulate that the land-based form is not as redundant as it seems: it may have been quite useful at some point to ride out dry seasons - or, more plausible to me, it may have been evolutionarily advantageous to be able to travel a fair distance between ponds or other such water bodies. And it may have been easier to retain water-based birth practices (a somewhat harder call at why it switched the second time - it may have just reverted).

It is also speculated that humans underwent several differeny kinds of heterochrony - for example, the human brain keeps developing for several years after birth, which doesn't happen with chimpanzees. In fact, Wikipedia's Heterochrony entry claims (based on Penin, Berge, Baylac, 2002 and Mitteroecker, 2004) that humans demonstrate 30 different neotenies compared to chimps.

Indeed, heterochronic processes (http://www.neoteny.org/?p=197) in human evolution impact our unfolding in many ways.

Proceed to http://www.neoteny.org/?s=gould for a number of different directions that the work of Stephen J. Gould has influenced my understandings of these processes.

Thanks for the links. A veritable kalaidoscope of ideas. You certainly don't seem to be a scientist by training or temperament, which I am often slow to realise can at different times be a Good Thing and/or a bad thing.

I am a scientist by temperament, and so - I feel - find it harder to so rapidly traverse the many subjects that you do. My temperament inclines me to nail things down with an amount of precision before moving on - and so I can seem to move rather slowly sometimes.

Too much to absorb, too little time in one's lifetime.