Linking us to starfish

More precisely, this post is about the connection between vertebrates and echinoderms (starfish, sea urchins, and so on).


The New Scientist article mentioned in the last post describes this connection, which seems fairly uncontentious on the whole, with broad agreement in the sources I've consulted (Tudge, Dawkins, Palaeos, Wikipedia).

It goes like this, according to the article: echinoderm -> hemichordate -> sea squirt -> lancelet -> vertebrate.


By phylum, the latter three are all chordates, but sea squirts and lancelets are more basal than the vertebrates we know and love. 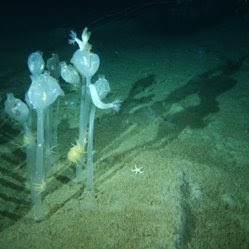 Tunicates (sea squirts) - © Martin Riddle
They constitute the three sub-phyla of the Chordata phylum: respectively Tunicata (Urochordata, until recently), Cephalochordata, and Vertebrata. Wikipedia lists the number of species for each as approx 3000, 30, and 58,000 respectively.


The article suggests lancelets were probably neotenous tunicate larvae. Funny to see sessile marine creatures (pictured above) related to vertebrates. But from what I've read, most sessiles seem to have a motile juvenile phase. So the above is what we could have looked like if we'd continued developing, rather than reproducing early then trundling off down a different path. Rather a plank in the eye for creationists, I'm afraid, but an object lesson in deanthropocentrism.

I recommend this entry in a Nature.com blog about tunicates (it's where I got the nice picture). Eerie.
Posted by S Simmonds at 10:57 pm