A fresh claim had been made that the putative homo species Floresiensis (the so-called "hobbit" found in Flores in Indonesia) were actually modern humans suffering dwarf cretinism.

This from Peter Obendorf, Charles Oxnard, Ben Kefford, of Melbourne's RMIT and the University of Western Australia, published in the Proceedings of the Royal Society.

The claim is that the dimensions of the fossil specimens were exactly equivalent to those of dwarf cretins, and thus displayed iodine deficiencies [resulting in thyroid malfunction]. "Dwarf cretins grow not much more than one metre and their bones have distinctive characteristics very similar to those of the Flores hobbits," according to Obendorf. 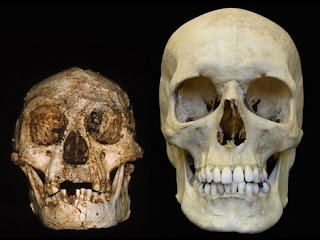 The immediate impression from the article in today's Herald is that these are scientists from other disciplines, not paleontology. The suspicion that they're taking the evidence out of context is borne out by the fact that they haven't studied the actual relics, and they misconstrue aspects of the fossils including, an area of skull that was actually excavation damage, rather than evidence supporting the new thesis. (From the paper's abstract:"We find that the null hypothesis (that LB1 is not a cretin) is rejected by the pituitary fossa size of LB1, and by multivariate analyses of cranial measures.")

The press release on RMIT's own site illustrates how much of a speculative exercise it was, initiated by Obendorf spotting a superficial link between floresiensis and historical pictures of cretins(!) Obendorf is hard to find at RMIT, but he's described as a human ecologist, which can be somewhat helpful but ultimately not too encouraging from a paleontological perspective.

Amongst other things, Colin Groves from ANU said the new paper "also ignored the fact the hobbits had primitive chins unlike those of modern humans".


Incidentally, the Herald article seems to be sourced from two separate reports, one of which refers to Floresiensis descent from Homo erectus; the other from australopithecines. The former, from AFP, is the more usual lineage description. The latter, from the Herald's own reporting, is not really sufficiently precise: australopithecines are much older ancestors of erectus. Reporters are not usually trained in anthropology.

One curiosity: the abstract also says, inter alia: "We show... how remains of cretins but not of unaffected individuals could be preserved in caves." That's quite a claim, if it's based on chemical science. It could easily, however, be based on speculation of social circumstance. I don't know, not having read the full article, but since the paper somewhat reeks of speculative application of anotomical science, I'm not going to hold my breath on the outcome.