Climate change: Anyone for back-pedalling?

Just clearing out a few outstanding references to climate change.

The Australian government is making quite a rapid U-turn on climate change – particularly on carbon trading. I expect the Stern review, coming as it did from a respectable establishment source, ultimately played no small part. Here’s an economic analyst’s view of that change, as well as on the Stern review.

A poll of voters flags the level of concern of the issue now. [However, polling voters is quite notorious for demonstrating people are a welter of contradictions, and consistently want their cake as well as eating it.]

[All this as the Sydney Morning Herald's pet "shock" columnist (Miranda Devine) trotted out her usual pet climate change sceptics - a fast vanishing breed! - as well as a superannuated politician from the far side of the world. The ice under her feet is vanishing daily.]


Meanwhile, ice loss from Antarctica is hitting 152 billion cubic kilometres per year; Greenland’s losing 112 billion per year – whereas in the 1990s it was in equilibrium in terms of losses and gains. This is where the headline problem lies.

...and what are you doing about it? We registered our concern [beyond the ballot box] at the International Day of Action recently: 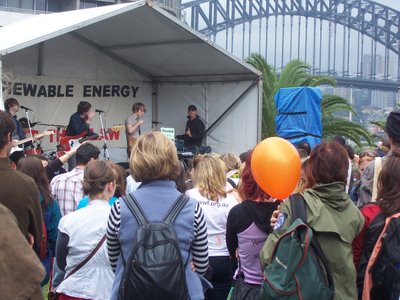 Ironically, the day was drizzly, as you can see in the distance. The band was surprisingly good to these ears jaded by too many average bands. They're called Marching Room. A good family crowd overall, although my wife whisked away the kids under the pretext that the music was hurting their ears. You're never too young to rock, but much as she pretends otherwise, she's just not rock enough. Oops, strayed rather drastically off-topic here...
Posted by S Simmonds at 8:29 am