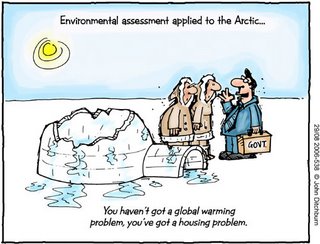 "I travelled to the Alaskan coastal town of Barrow, the most northerly community in the US and past which ships travelling through Arctic sea routes would journey. There, senior members of the Inupiat community said that they had been aware of the change in the climate for the past 20 years - before the scientists' instruments had detected the shift.
At that time the sea ice should have been fixed in rigid sheets stretching towards the North Pole; instead it was forming far out at sea, 160 kilometres from the shore. 'We have been saying this for a number of years', said Eugene Brower, the local fire chief and captain of a whaler. 'In the fall, it takes longer for the ocean to freeze. By now there should be ice here.'

"The broader implications of this ice melt are extraordinary. Scientists have warned that the geography of the world's landmass could change as low-lying areas flood, that entire habitats could change and the lives of millions of people living in the most vulnerable places in the world could be threatened."