World: Spain, Morocco, and the Devil

Bazza's mention of a holiday in Marbella, in Spain, reminded me of my trip there... a long time ago.

My main impression of Marbella was of a tourist strip unceremoniously dumped between a pleasant little town and the sea. English pubs and German tourists abounded.

I have a strong memory of a policeman saying "arriba, arriba", with wide sweeps of his arms (that was where the youth hostel was, up the hill). We also stopped at an art centre, which seemed to have some association with Picasso. I bought the pendant below, my Spanish Devil. It wasn't terribly expensive, and it's possibly made of brass. But it's memorable. Is it reminiscent of Picasso in any way? Or just some local artist's trinket? 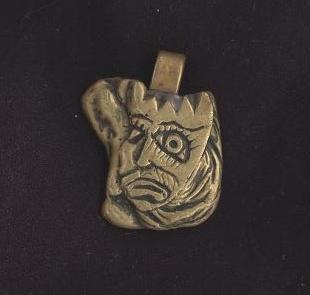 From there, we got a wild and crazy ride to Algieciras (the bloke was probably both drunk and mad), then a ferry to Ceuta ("sway-ta"), a little-known Spanish enclave on the tip of Africa.
From there it was a border crossing to Morocco, which was a surreal experience. My friend got hassled because she had an unusual haircut (shaven at the sides!), and the guards simply wouldn't let us through.
Just as we were ready to give up, there was a sudden commotion, people yelling and rushing all over the place. I remember a bunch of matronly women in dark robes, running from Ceuta to Morocco. The guards gave some of the women a kick, but nothing really came of it. Except that we unobtrusively made our way through.
It was probably something to do with duty-free shopping/smuggling from Ceuta.


In Casablanca, we ended up locked up all day in a well-appointed flat, by a well-meaning middle-class gentleman who said he traded - what? - between Morocco and the Netherlands. He didn't want us to brave the Youth Hostel in Casablanca, and he wanted us to be safe, but not to make off with his worldly possessions. Hence the prison treatment.
For our troubles, he took us to a couple of good restaurants. He said he was Berber; the only language we had in common was French. We spent a very pleasant afternoon at a seafood restaurant overlooking the sea in Rabat. But the strain of practising my rusty French gave me quite a headache later.

Those are my main memories of that holiday (oh, and some food poisoning on the way back). I had a look for some photos to include here, but it was too long ago and far away.

All I have left, then, is the so-called Devil above. I'm keen to hear any comments on it.
Posted by S Simmonds at 10:30 pm