Climate change: the good and bad of moving forward

This year has seen the mainstreaming of climate change awareness, due in no small part to Gore and Stern. The only people left to quote by the deniers are right on the fringe by now (thanks, Miranda Devine). That's the good news.

There's more to come. Legal systems are factoring it in. The NSW Land and Environment court revoked approval for another coal mine on the grounds that the environmental assessment was invalid because it didn't factor in carbon emissions.

China registered the biggest increase, although it's far behind others on per capita terms. China is responsible for 5% of emissions to date, whereas Europe and the US each account for 25%.

The current emission rate is at the high end of IPCC modelling; their worst case scenario is looking likely. 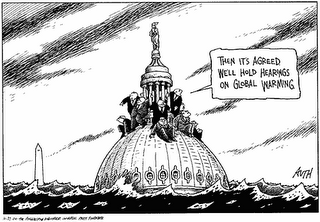