Biodiversity loss: there are reasons

Letters in a recent issue of New Scientist (16 December 2006) gave reason for great pessimism over biodiversity.

The gist of both letters was that the international drop in tiger populations has been due to loss of habitat, rather than poaching for the market in body parts. One letter tells of a recent symposium on tigers, and said there was general agreement that tigers occupy 40% less area than they did 10 years ago. This is an alarming figure, particularly considering awareness of the issue has been global for considerably longer than that. Decades of concern from the developed world has done nothing. Year by year, habitat has been steadily shrinking and will continue to shrink. 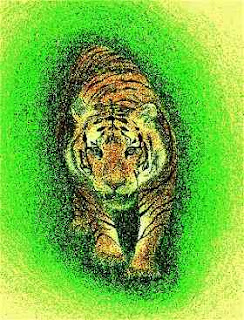 It’s easy to blame those countries with a tiger population for their indifference or their weak legislation or enforcement. It’s considerably harder to foster the requisite political will where it matters though.

Developed nations have largely destroyed their native habitat in the march for wealth and progress, and they expect poorer countries to do what they could not do. There is really only one solution: an increase in wealth in those countries with significant remaining wilderness. How that happens is up for debate. But at the very least, the West can give them a step forward: technology transfer would certainly help. But we richer countries are loathe to do what it takes to even feed developing nations, let alone aid them on the path to development.
In fact, it has been demonstrated that human populations stabilise - family sizes reduce - as wealth increases. One more reason to expect better wilderness preservation with escape from poverty.

Without proper partnership between the developed and the developing world, there is a lot more wilderness destruction to come.

The author of one of those tiger letters suggested the tiger population could be saved by fostering the market in tiger body parts: “…the tiger can in effect pay for its own survival”.

Well, that’s one approach. It may ultimately be necessary. It’s a good argument for those who don’t understand the value of biodiversity: appeal to its value in exploitation by humans.

But I’m not convinced that farming such animals is a good substitute for wilderness areas sufficient to enable the full diversity of local fauna to fully interact. We are immeasurably poorer for the loss of wilderness.
Posted by S Simmonds at 6:04 pm