Some insights into mental illness

I'll briefly summarise the insights that struck me as meaningful.

There is a main difference between schizophrenia and bipolar disorder: the apparent lack of emotion in the former, and extremes in the latter. 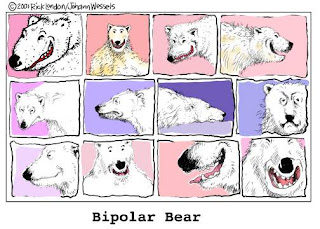 However, it's unsurprising there's some conflation of the two: in reality, there can be considerable overlap.
Although there has been some effort to identify a genetic basis for these, nothing significant has been found so far...

On to paranoid psychosis. This can include delusions of persecution and grandeur, and auditory hallucinations. In fact studies have shown that about 10% of the population will experience those "voices"at some point in their lives. Research has linked these voices to inner speech, or verbal thought, as when children learn to think in words by talking aloud to themselves.

Patients have been shown to subvocalise when “hearing voices”, suggesting they can’t distinguish between their own thoughts and external stimulus.

Trauma has also been linked to paranoia. For instance, two studies have shown a high rate of sexual abuse in patients who hear voices.
There is also evidence that delusions follow long-term experiences of persecution, perhaps leading to oversensitivity. Further, persecutory people have been shown to form conclusions (often wrong) more quickly than average people. [perhaps that reflects higher stress levels due to trauma.]

All these factors can combine to produce full-blown paranoia.

Much of this may sound rather obvious [in hindsight], but it serves to demystify the illnesses.

The article mentions an interesting experiment involving two jars of beads, one with mostly red (over white) and the other with mostly white. Lay out a sequence from one jar, and ask a subject to decide which jar the beads came from. My thought: it may be helpful to demonstrate to patients the quicker rate of decision making than average, and the greater propensity to incorrect choices.

Cognitive behaviour is also canvassed in the article. An example of this is to encourage a patient to gather concrete evidence of their beliefs, then use experimentation to test that evidence.

The article concludes that these insights pave the way for a greater range of options in treating people with these illnesses.
Posted by S Simmonds at 6:24 pm

Email ThisBlogThis!Share to TwitterShare to FacebookShare to Pinterest
Labels: brain