In the past, I've assembled a list of personal action points (reproduced below) on climate change. They range in scope from the effortless to the consciously proactive. The following can be considered a final step, although it is currently quite difficult, both in analysis and execution: 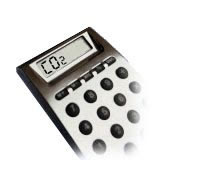 It's the final step simply because most other actions on the list offset this. There's a lot more that can be done (apart from spreading the word), but personal action revolves around reducing one's personal impact on climate change - in other words, reducing carbon emissions. Yet no matter what you do, you're not going to be able to eliminate all carbon emissions you are personally responsible for.

Once you've taken the easy steps (of reducing your carbon footprint),
a) calculate your remaining impact in carbon emissions;
b) purchase offset credits.

For the first, there are a number of web sites that enable individuals or businesses to calculate their nett carbon load: try, for example, CarbonCounter, ClimateCrisis, NativeEnergy, or Australia's Origin Energy. Typically, they try to make it easy by focusing ot the signigicant carbon-emitting activities, rather than attempting to ferret out all emission sources.

The second step typically involves paying an organisation to do the offsetting, for example by planting trees. It pays to do a little homework though, as it's not easy to do this economically. Recently in Australia, an offset organisation was shown to have difficulties with its model, since it only leased out areas planted in trees, so the tenure wasn't stable.


Suggested steps for reducing your own emissions:
1. Buy your electricity from renewable sources (eg "green electricity" from your supplier)
2. Use public transport where possible.

Suggested steps for personal action:
3. Use your vote to target those with the strongest commitment to action on climate change.
4. Move your superannuation to a green (ethical) fund/manager.
5. Talk to others.
6. Offset your carbon emissions.
Posted by S Simmonds at 7:34 pm