Virtual worlds on the internet are forging a new paradigm that has unlimited possibilities. We simply can't know where they'll take us.

Create your own character, and you can interact in real time with people from around the world, but in a world which is only limited by imagination. The representation is like an animated movie (albeit -to date - with clunkier graphics), but the world is three dimensional and you can explore it and interact with others via your character (avatar). 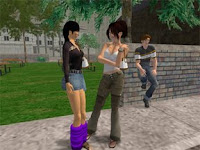 Second Life is the biggest virtual reality environment, with over a million users accessing it. It is already being used by corporations and organisations with an aim of finding additional ways of interacting with people, via created environments and avatars. For example, IBM can have conferences, publicise their products and services, and so on. 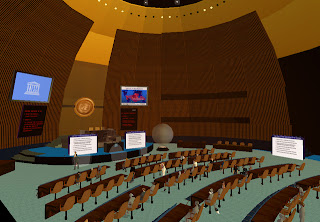 And now: virtual violence. France's racist political Party, Front National, has a presence in Second Life - which has now been disrupted by anti-racist activists. The potential for real violence is nil, of course, but the potential for disrupting the activities of others is real.

The real point here, is that interactions in virtual reality are getting more and more sophisticated. That real people and organisations recognise the benefits of a presence demonstrates the enormous potential behind this new paradigm - a full-on blend of the real and the imagined, to the point where real outcomes can be generated - in effect, negotiated, developed through interactions - that would never have been possible in real life.

Another new fixture on the internet firmament, another new environment to be learnt, another reality.
Posted by S Simmonds at 12:16 pm