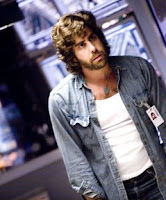 My thoughts keeps returning to the film Deja Vu - for the wrong reasons.

It's not often am I wrenched into consideration of cinematic language, and how storytelling works.

This film starts out as a Hollywood "action" film, then partway through it takes a sudden 90 degree turn, and we're into science fiction territory.

Don't get me wrong, I'm all for the mainstreaming of science fiction. And the original script must have been considered exciting - it garnered a multi-million dollar sale.

I didn't complain about the science fiction turn in The Prestige - with which this film shares some mind-twisting similarities.

Simply, the language of cinematic narrative seems to have been abrogated here. Out of the present-day, down-to-earth realism - and violence - of a detective story an out-of-genre plot device is suddenly thrust upon us.

It was jarring. More importantly, it had me pulling back from the suspension of disbelief that narrative requires. I was suddenly thinking about a film, how it was written and made, rather than following a story.

My feeling is that the director - Tony Scott - and producer - Jerry Bruckheimer - share culpability for what was created, how it was created, how it was shot and cast. Denzil Washington, for example, is quite a capable actor. But it needed someone who could pull the film out of the everyday, helping to ease the transition before the plot device kicks in. Tony Scott, too, is at his ease in a crashing, wrecking Hollywood film, and he didn't work on the transition enough.
As a team effort, it fails - but culpability goes to the top. This is a shame, because in other respects it was an engrossing film.

(On the other hand, the pre-film logos of the two production companies were quite impressive :)
Posted by S Simmonds at 11:14 pm